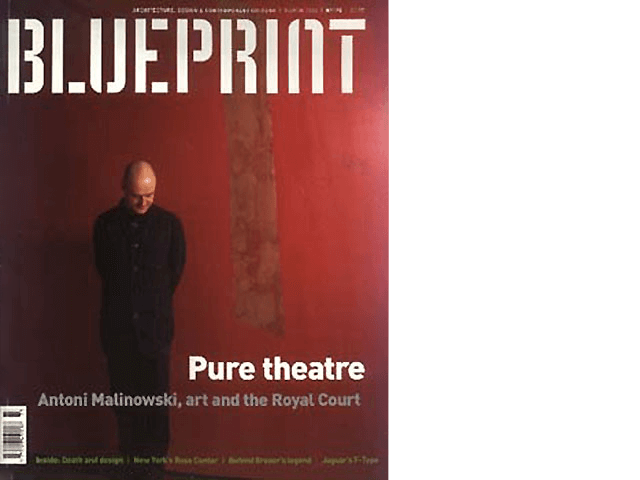 For four long months, artist Antoni Malinowski painstakingly applied layer upon layer of vermilion red paint to a wall in the middle of a building site. His canvas was no mere picture, hut the 86 sq m outside wall of the auditorium drum of the Royal Court Theatre in London’s Sloane Square. Thankfully, his efforts have paid dividends – the installation is the proud centre piece of a £26 million refurbishment of the 112-year-old theatre by architect Haworth Tompkins.

Dark for four years during building work, the theatre is now lit dramatically at night. Malinowski’s subtly decorated vermilion wall glows like a luminous beacon across the square, heralding the theatre’s long-awaited reopening by highlighting the new intervention behind the old facade. It symbolises the intentions of the architect in this complex project: to retain the framework and flavour of the old, but combine it with unabashedly contemporary additions which suit resident company the English Stage Company’s cutting-edge reputation.

Art and architecture collaborations are not rare but it is unusual to find one quite so central to the building project. Apart from a wall-painting in Venice, Malinowski had never attempted such an architectural installation, while Haworth Tompkins had never worked on a theatre in its nine-year history. Both found the collaboration funded by the RSA Art for Architecture scheme – immensely rewarding.

It has been a labour of love. Before starting on site, Malinowski spent “a few years” finding exactly the right pigment for his vermilion wall. Nicknamed “jam pots” by the workmen on the site because he always had a pot of red paint in his hand, he worked meticulously to create the painting on three levels of the auditorium wall visible through the facade on the ground and first floors and, in the basement level, from the new cafe beneath Sloane Square – applying three, sometimes four layers of paint.

“I thought of vermilion red as a colour which will celebrate the space and also act in a neutral way in that it is neither sad nor happy,” said Malinowski. To animate the surface, he drew inspiration from the movement of sunlight and car headlights across the wall. On the first floor, where the painting is the backdrop to the balcony bar, Malinowski created three large black rectangular shapes across the wall and applied further marks using very small brushes to fill in the panels. In other places he left some of the plaster showing to give a somewhat scuffed look lower down the wall. On the ground floor, where his painting is behind the box-office, the marks are more animated, with the positioning of the rectangular marks suggesting the continuation of the painting upstairs. In the basement section, he concentrated on the area of the wall that gets sunlight and used masking tape to expose small rectangular areas which he then filled in with tiny vertical strokes.

Malinowski is delighted with the result: “It was hard to know how the work would turn out. They had to trust me, and it was very brave of them,” he said. The theatre shares his enthusiasm. “Antoni was an inspirational choice by Haworth Tompkins,” says theatre executive director Vikki Heywood. “He’s created a work of art that’s completely durable. It’s not precious – you can walk up to it and touch it and lean against it. The mapping of the way that the light moves across the wall is fantastic.” Malinowski’s installation played a key role in Haworth Tompkins solution to what in many ways was a worst-case scenario brief. The theatre, confused by piecemeal additions, was in a desperate state and without the £18.8 million lottery grant would have had to close. When it was built, it was a receiving house for plays which, since scenery generally arrived rolled up, had none of the access suitable for modern day sets. These ended up having to be sawn up to get them in and out of the building. Backstage facilities were cramped and unhygenic, and the stage itself was a disaster, saddled with dangerously obsolete technical systems. Twice as much floor space was needed to make the theatre function properly, but the 744 sq m site was severely constrained above-ground and hampered underground by the presence of a main sewer and the Circle Line underground.

Haworth Tompkins’ solution was a new rear extension, cafe facilities in a new area beneath the square and a clever remodelling of the Victorian building. Unable to fundamentally alter the facade of the listed theatre but desperate to create more impact and amenity in the narrow space between the entrance and the auditorium drum, the architect chose to make the facade as permeable as possible and highlight the drum behind to give the building a new, more public, identity. In this way it mirrored the attitude of the theatre company, forward-thinking rather than nostalgic. The drum, rather than the outside of the building, is now the boundary between the theatre and the outside world.

To this end, the architect stripped the BIitz damaged building bare, exposing the Victorian rivetted iron structure, the brickwork around the new staircase to the upper auditorium, the terrazzo entrance floor and retaining traces of change and imperfection. “If we’d replastered the walls slippery and smooth it would have been wrong. It had to feel used and marked. It can’t be pristine,” says Steve Tompkins. “There is an extraordinary resonance in the theatre,” he adds. “You feel a tremendous weight of history. We had to respect that but not sentimentalise it. Otherwise we’d have become paralysed.”

To theatre-goers, the change is far more dramatic in the circulation and front of house facilities than the main auditorium, the Theatre Downstairs, which has retained its dark wood panelling but has been given new scats on reraked tiers and stripped of some of its ornamental additions from the Fifties. The stage has a Jarrah wood floor which, like most of the wood specified by the architect, is reclaimed.

The most radical change is behind the scenes where everything has been brought up to contemporary standards, with new ‘get-in’ facilities for staging and new wing space for a carpentry workshop and scenery store, as well as an underpinned, reinforced and extended fly tower. In the smaller Theatre Upstairs, the roof has been raised and the scope for lighting and sound improved by the addition of more sockets. Ductwork is now hidden in the roof.

While inside the building it’s hard to tell when you enter the new rear extension for offices and dressing rooms, but it signals itself clearly from the outside, clad in Corten mesh at the side and cedar towards the back which will mellow with age. Actors will be pleased that their new dressing rooms have dimmer switches on the mirror lights, and that they can control the Cor-ten shutters to maintain privacy.

Re-opened in mid-February, it is too soon to gauge audience reaction but the theatre company is clearly delighted with the redesign, which at last gives the building a more public profile. The amount of additional light that goes into the building and the light that’s been given out is a very important aspect of what the building is all about. It’s fulfilling its role as a public building which it never did before,” says the Royal Court Theatre’s Vikki Heywood. “People will be surprised at the raw, basic look. I’m sure some will wish there were more carpets and more comfort but there’s room for lots of different theatres.” She hopes the art and architecture of the new Royal Court as well as the plays will be a memorable experience, so that the theatre will also be a “landmark for the way it looks rather than just the work it does”.

Standing at the Peter Jones store and gazing across Sloane Square to the red beacon shining through from inside the reborn Victorian theatre, it looks like she may be right.